The history of mankind is a never ending story of change, revolution, and evolution, but no span of a hundred years can have changed the world so dramatically as the Twentieth Century. We look at the people most responsible for changing their world and making ours. We count down from 101-1. The names of those who most influentially shaped the century, our world, and our way of life. 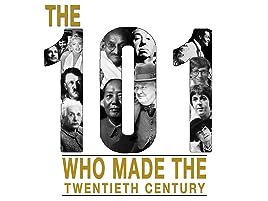 Starting with some of the most infamous faces of the twentieth century, Marilyn Monroe features alongside Margaret Thatcher and more, as we countdown from 101 to 89 in what is sure to be a controversial start to the series.

From the creators of the worlds first super hero to the most successful female pop artist of the 20th century, peacemakers’ warmongers and athletes all claim a place in this episode.

We countdown from 75 to 63 and showcase some of the most surprising characters. From Josephine Baker who walked along Paris streets with her pet cheetah, to leader who have forever changes the world.

Counting down from 62 to 50 we list scientists, revolutionaries, Generals… and even “the king”. But Elvis Presley isn’t the only surprise in this episode as he stands shoulder to shoulder with Amelia Earhart, Edwin Hubble and more. This episode touches on some issues which remain vital today and choices that changed the world and the way we live.

If this episode teaches us anything it’s that revolutionaries come in many different forms. All thirteen of our subjects have been pioneers and leaders in their fields and have changed everything, from the way we watch films to how we connect and work. For some the word revolutionary might only be a title but for others, such as Castro and Ghandi, it is far more real. This episode of heroes and villains features some of the most famous and infamous faces of the twentieth century.

The Sixth Episode features some major players from war and peace, from east and west. From inventors who have changed the way we live and fight to artists who have given us reasons to do both, we count through 35 to 24 and cover some of the most influential and infamous people who made the twentieth century – a long reigning monarch, a murderous dictator and the “father of the Atom Bomb”. Quite a mixture!

From a painter who changed the face of modern art to the most recognised figure of WWII, this episode spans the century, highlighting people of such profound influence that they can reasonably be termed “iconic”. Whether they’re reshaping a nation or reinventing the tools that will forever change the way we live, no one could argue that the Top Twenty are all people who made the twentieth century.

What would the world we live in look like without our Top Ten? It is hard to imagine but one thing’s for sure, in making the twentieth century they have indelibly influenced the world we know today. In our final episode we reveal our picks for the most significant people “Who Made the Twentieth Century”. The results will surprise many. Some will disagree with the choices, everyone will remain gripped up to the final reveal.